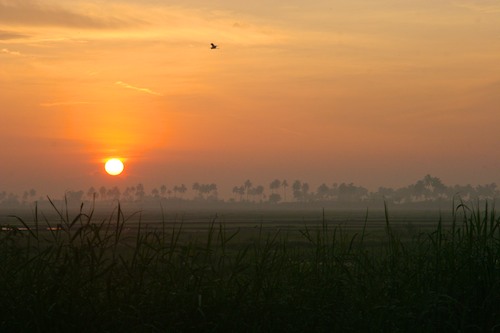 Tuesday, 24 Nov 2009 — The sunrise over our Kerala houseboat brings a new day, and soon the night is just a memory. As “Disneyland natives” we have to keep reminding ourselves that this isn’t the jungle cruise, it’s so beautiful. I take a ton of sunrise photos over the rice paddies, and as we putter across the lake April comes out of our cabin, tired but only a little grumpy. (I, of course, have to mercilessly tease her over the memory of her in her mock-burka, spritzing DEET everywhere, and doing the mosquito dance.) We see dozens of fishermen in their long, wooden canoes as we glide over a vast lake. There’s no horizon due to the light morning fog, and thousands of clumps of water hyacinth look like unreal, upside-down clouds, the water dotted further with hundreds of black birds awaiting fish breakfast. I can’t imagine another place like it, so oddly peaceful in the middle of this crowded, bustling country. 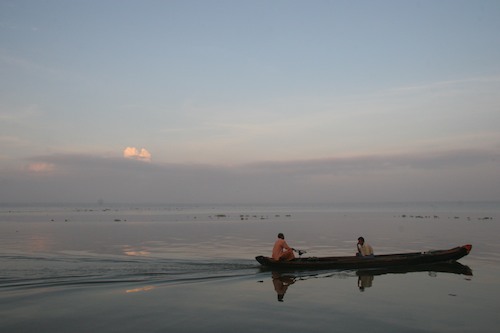 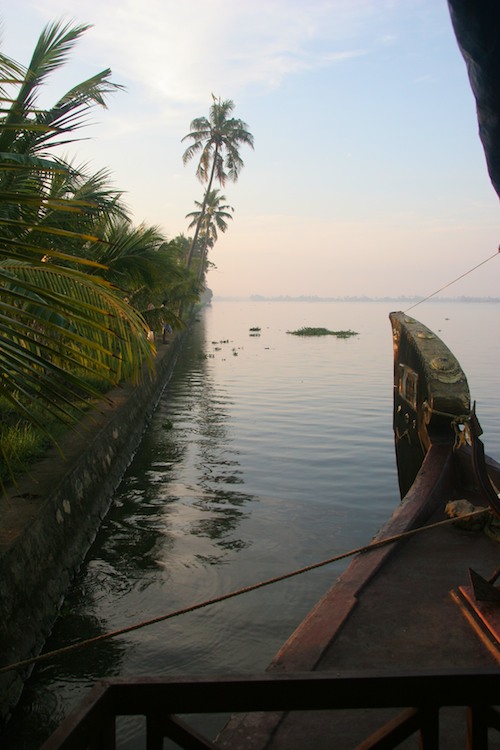 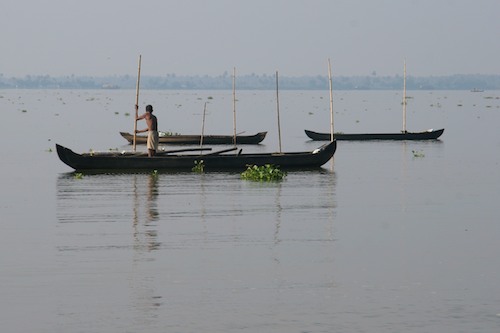 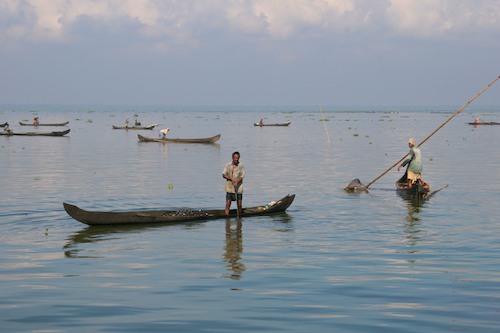 We have scrambled eggs (coated by the chef, of course, with fresh Indian pepper) alongside just-squeezed pineapple juice, and heavenly Kerala coffee. April wisely uses the jam and toast along with her stockpile of stomach-safe peanut butter (transported across the ocean in our luggage) to make PB&J lunches. The crew thinks we’re crazy. 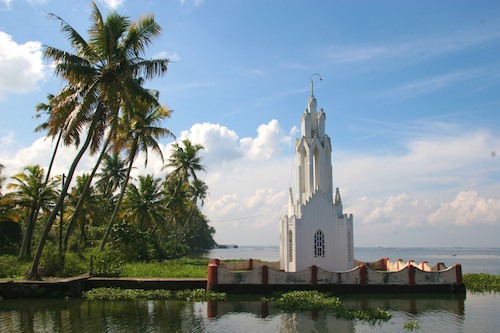 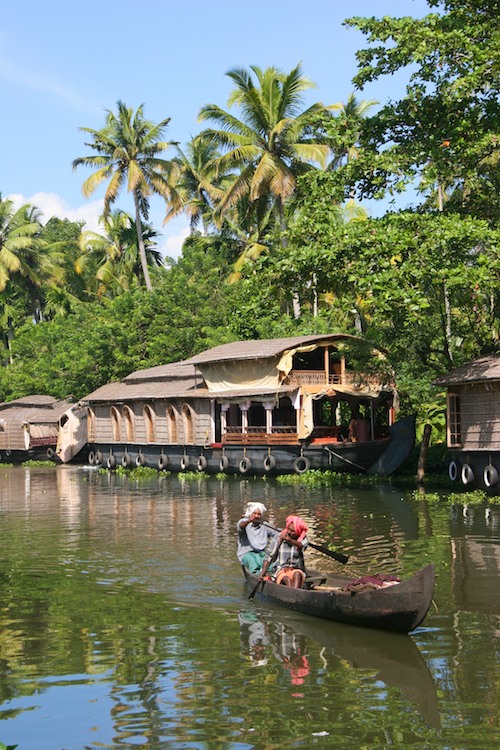 We dock by 10:30am — the problem being that our flight is at 8:30pm and we have nowhere to go until then. We add an extra 600 rupees (about $12) to our taxi fare and hire the English-speaking driver as our guide for the day. (As we’d headed out of Bangalore — where everyone speaks English — the local language becomes more and more prevalent, from Kannad to Tamil to Malayalam … and less and less people speak English.) Our driver first takes us to a local bird sanctuary (Kumarakom), where we’re told that the 5 rupee price goes to 45Rs for foreigners, and where, we’re told, there aren’t actually any birds. We skip it, and instead go to a local “curiosity shoppe” to search through cheap trinkets, age-old debris, and hidden treasures. We buy some local wood handicrafts, and find this 1-foot wide by 2-foot tall wood carving that we fall in love with. It’s a man and woman (Shiva and Parvati, apparently) in romantic courtship, handcarved, a light-colored wood, clearly old; in need of mild restoration; and far too big to easily take home. April and I fall in love with it, but it’s clearly impractical, and expensive (4000Rs) compared with all the other 100 rupee trinkets for sale here. We almost don’t get it, but finally give in, figure out how to pack it, and buy it for a negotiated 3200Rs ($65 or so). It turns out — assuming it gets home okay! — that it might be our best purchase ever. Later this day we see a nearly identical piece at a local museum — it’s dated 16th century. And at the airport I see a tiny, handcarved piece priced at 450 … dollars, not rupees … that fit in the palm of my hand. So I figure that paying $65 for a huge, possibly 500-year old beautiful art piece that we love isn’t too bad. 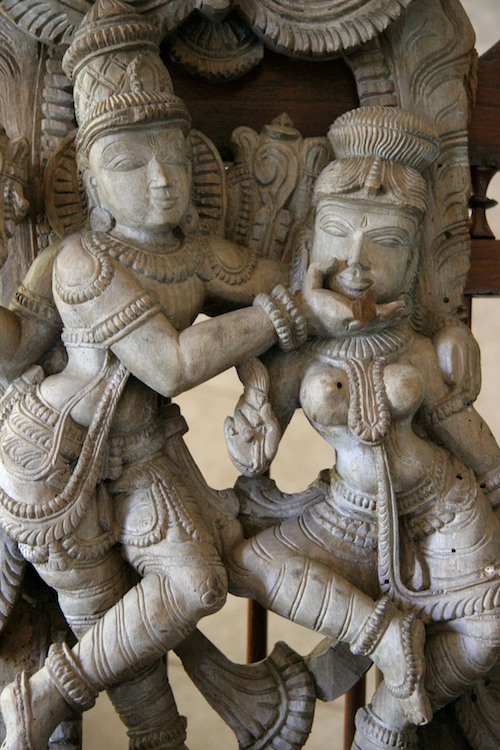 The shopkeeper has never charged a credit card, so I help her out with it — next to an antique sewing machine that is still used, not the only one we’ve seen on our trip. She doesn’t get the idea of me signing the slip, I have to take it away from her, sign it, and shove it back to her just to be honest about it. 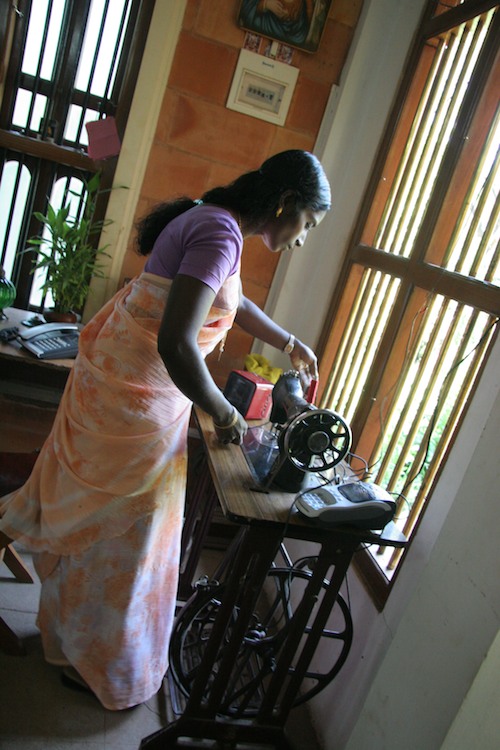 We drive the insane roads, stopping as we like. On the roads, we see our normal India sights:

We see several near head-on collisions amongst all of this. At one point, Â a car heads directly into a bus. Before they collide, another car somehow squeezes in from the other direction in a near-perfect 3 way head-on collision. They all manage to stop just in time … but the moment they stop an impatient scooter drives through, somehow weaving between all three. Of course, no one flinches … it’s just a day’s drive in India. 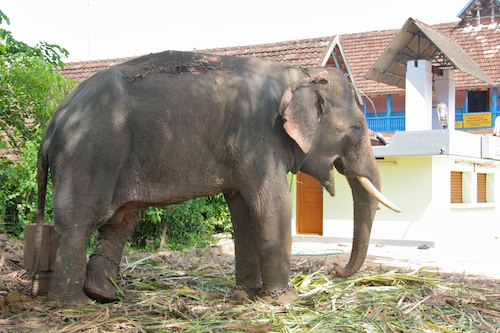 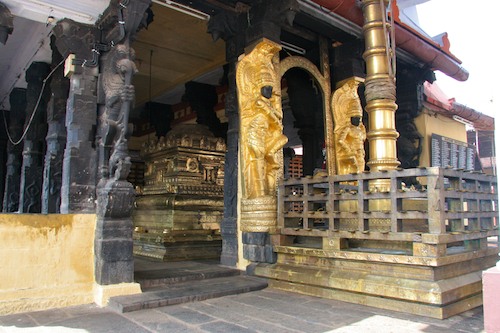 We stop in Vaikom and arguably the oldest Shiva temple in the world, at around 600 years old. (We also find out later that this was a very historically important and fascinating location. For most of the temple’s history “untouchables” weren’t allowed on the roads near the temple. Gandhi, testing his nonviolent movement procedures for the first time, was heavily involved in securing freedom of movement for the untouchables on the roads around this temple.) We pay 1Rp (2 cents) each to store our shoes, and we walk barefoot through the grounds. We realize that our feet aren’t as tough as the locals, and we begin to dance in pain from the sharp stones and our burning feet. We see the local elephant, chained in the corner, eating palm leaves (I knew I’d see one!), and we check out the beautiful altar. We’re massively out of place here, everyone outright staring at us, school boys laughing at our crazy sun dance. It’s fun, though, and we even get a few minutes shopping outside the temple gates down the main city drag. In fact, April finds a sari store that’s affordable. Instead of using them for saris, she just wants the fabric for curtains and coverings in our house. The local shop girls titter at the weird American who only wants plain saris — old lady saris! — and more and more of them come around until she has 11 people “helping” her at one point. 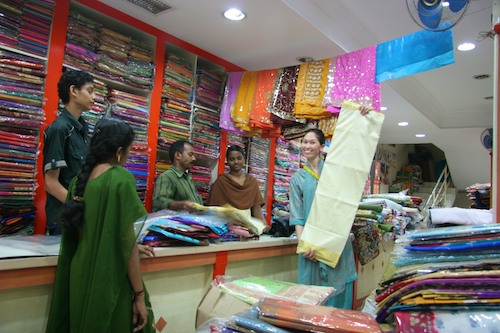 Onward our driver takes us to The Hill Palace in Thripunithura –Â the official residence of the Kochi royal family. The entry fee goes up 3 separate times (car parking fee, foreigner fee, and camera fee) to a whole 180Rs ($4). There’s a 1.75kg solid gold crown that Vasco de Gama gave the Cochin (Kochi, whatever) royal family; many old wood carvings from local temples (including one that exactly like ours!); a “deer park” where the deer eats a creamsicle, stick & all; and a very random, huge T Rex standing out back. (Of course, we take pictures running from the huge dinosaur like it’s going to eat us, once again making the locals think we’re crazy.) It’s interesting, and the nicest museum that we see on our trip … but I think we’re both a bit jaded by living near the Getty, and having seen the Louvre and other great museums of the world. It seems a bit “local” in comparison. 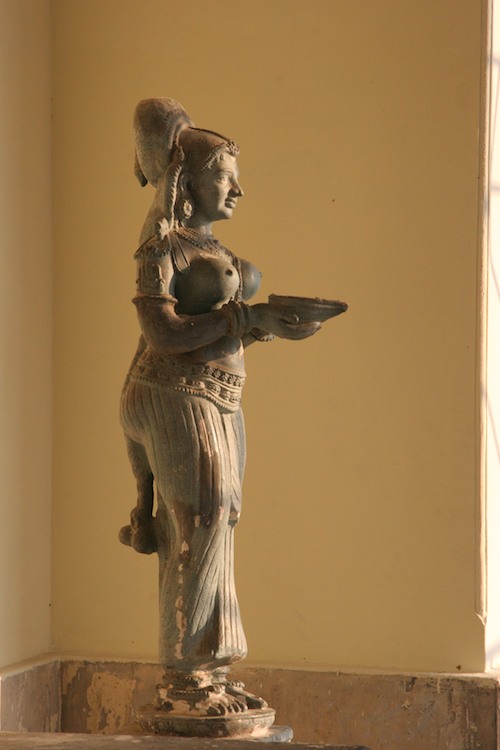 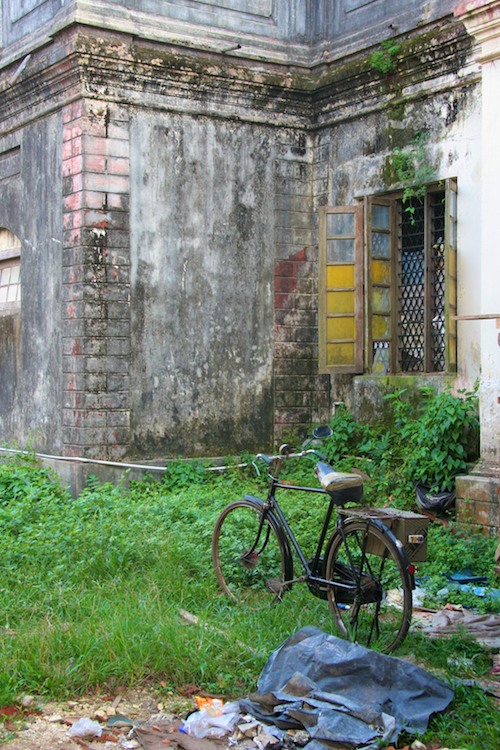 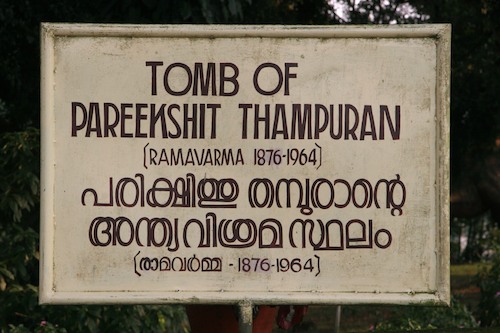 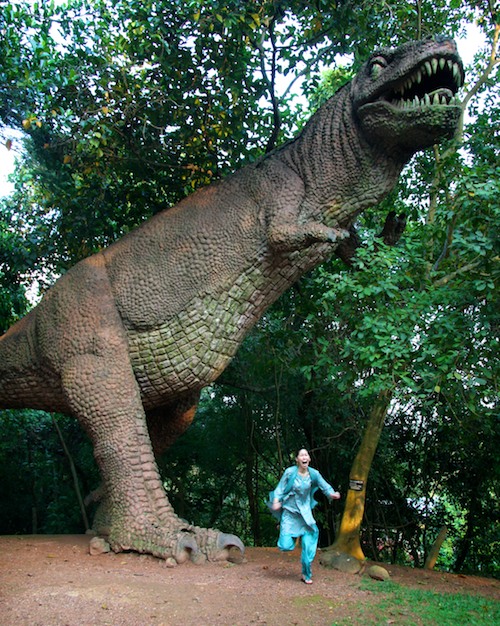 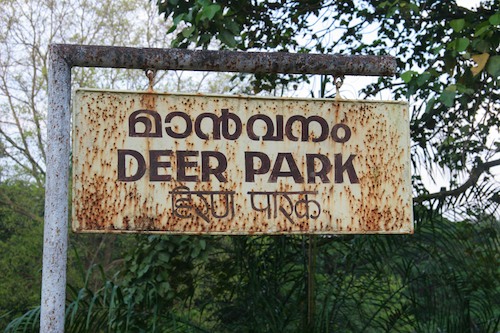 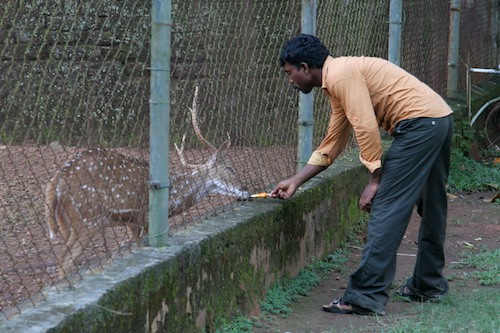 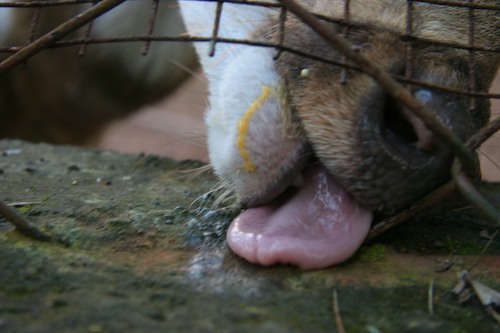 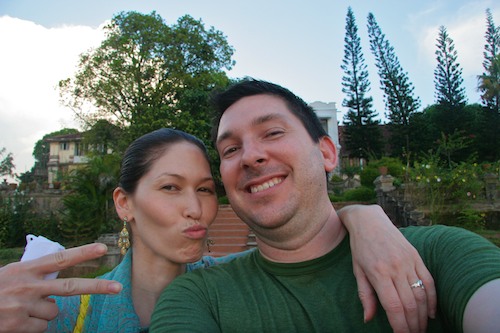 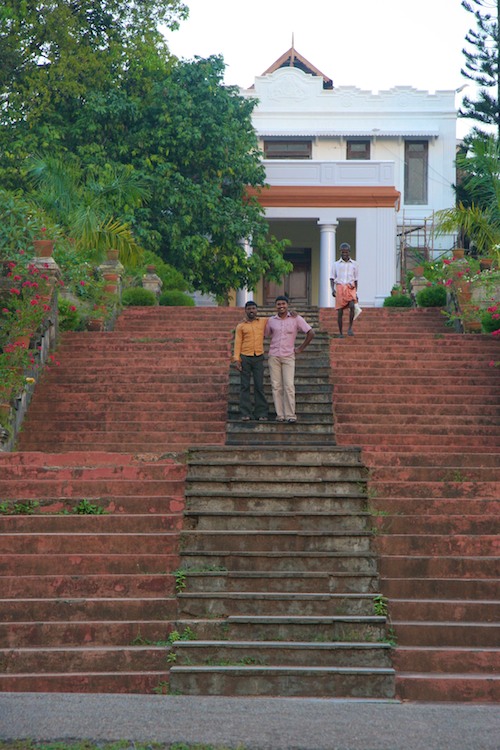 By midnight we’ve made it through the great Kingfisher Airlines flight and back to Bangalore, and on to our “10 km” trip (i.e., 1.5 hours) to our resort, Ayurvedagram. It looks beautiful, and we look forward to a full day of doing nothing here, our last full day of the trip.

(Note:Â TheÂ full photo gallery from India is here, with the post above covered in photos 1283 -1597. TheÂ other posts on India are here … and the reason why we’re on this trip is the non-profit website we’re creating,Â Creative Offering.)