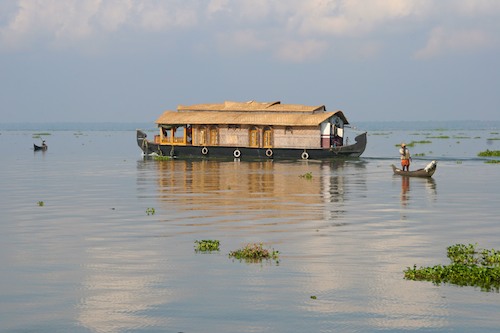 The journey to our houseboat in Kerala — seemingly like all journeys in India — was quoted as 1 hour … and delivered as 3. (Breakfast at the resort, by the way, was marsala omelette, fresh squeezed pineapple and watermelon juices, various vegetables in sauces, and the heavenly local coffee, which is so good it tastes closer to hot chocolate than coffee.) The houseboat is around 50 feet long, with a thatched roof, decently sized bedroom, a crew room, a kitchen, and functional western bathroom. 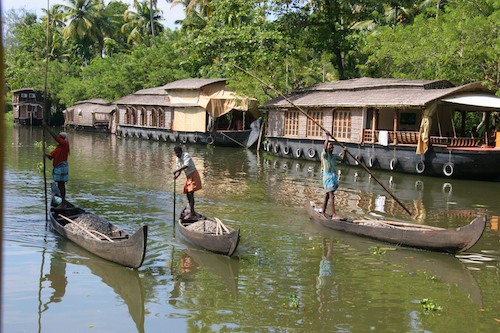 (Have I mentioned bathrooms yet? April has come to prefer the holes in the ground, as they are much easier to use when wearing a sari or other traditional clothing. Even in the nicest homes there often isn’t toilet paper — this isn’t because it’s not affordable, it’s because there is some system with (a) a hose and squirter, (b) a large bucket, and (c) a small bucket. I actually never figure out how this combination of items works together, and I’m too scared to experiment for fearing of spraying water over everything and still not making any progress. Okay, I googled it, and in picturesÂ here is the hilariously done answer. Now I know.) 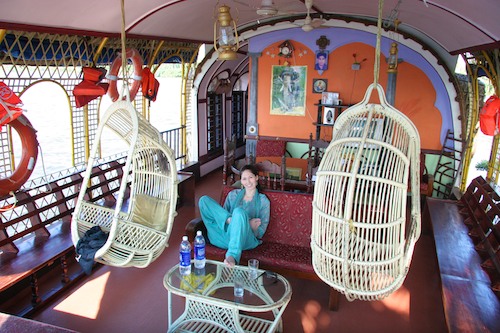 The owner of the boat comes aboard, talks to us gruffly for 2 minutes, and leaves. There are no schedules, no crew introductions, no safety (ha!) briefings … and we never do figure out the hierarchy of the crew. (They don’t speak English, by the way.) We ask the owner if we can stop in small villages along the way, and he says simply “You have 3 stops.” 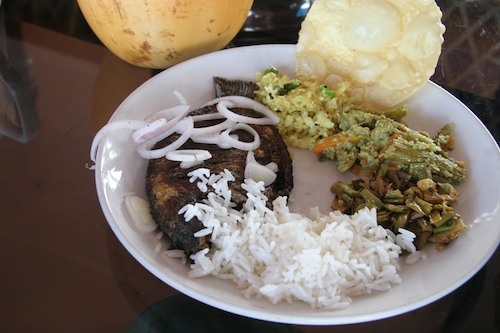 Like Kochi, I had various website and travel-writeup based expectations for the Kerala backwaters houseboats. I expected that we’d head up & down narrow inlets (as in Apocalypse Now, without the war), stopping at random quaint villages to mingle with rural Indians, finding fresh-caught fish to be cooked up for dinner. The reality of our 3 stops, though, was:

Yes, it isn’t exactly the romantic village idea that I’d had in mind. Most of the time we are on a big lake, with one small jaunt down a smaller tributary. The scenery, though, is gorgeous: tons of local dugout canoes, men digging up shells, fishing, or using a large pole to push forward. There’s a brightly colorful church (Bethlehem) that’s nearly as wide as the islet that it’s on, accessible only by boat, surrounded by coconut trees. The water is clogged with the floating plants, which adds to the surreal aura of it all. 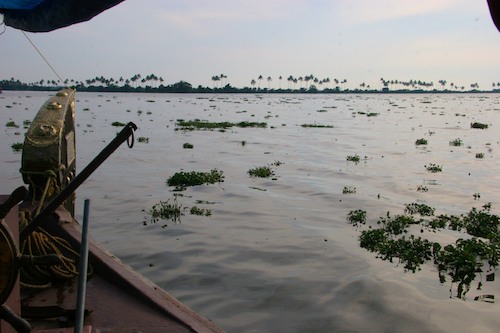 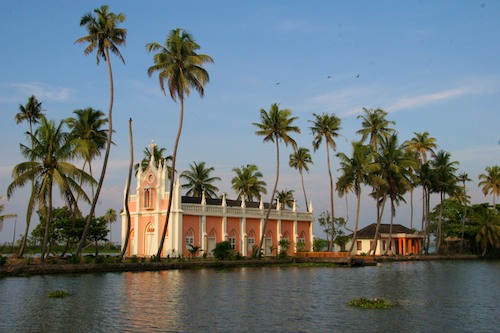 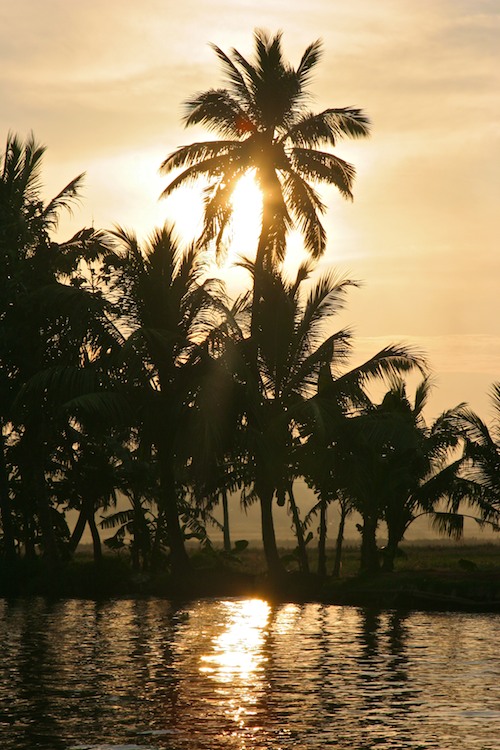 (even laundry LOOKS great here ... you just don't see the bugs, dirt, nor the smell)

Lest my initial rant sound too negative (and just wait, there’s more), I have to confess that along with the photo opportunities, the freshly prepared meals are also top notch. A whole fish, spiced and grilled, with various side dishes and freshly made bread is our lunch. And later, dinner is fantastic as well. 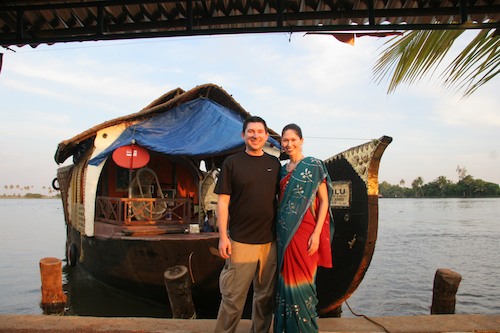 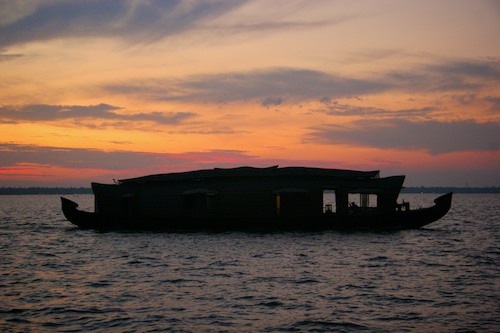 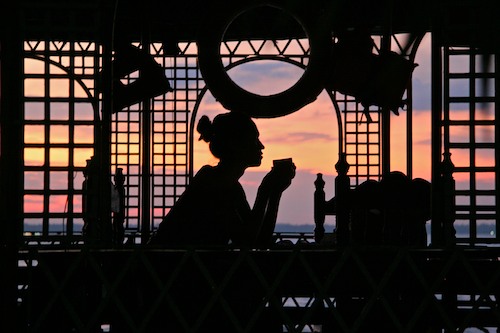 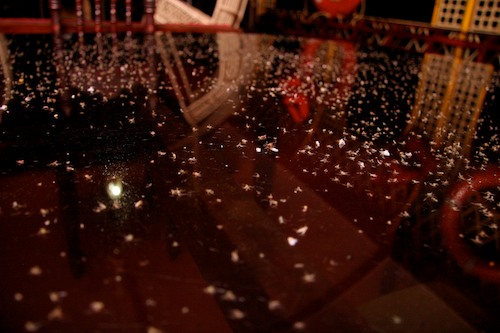 (Just a few of the mosquitos, early in the night ... you should've seen it by morning -- covered!)

Before dinner, though, we dock next to a rice paddy, tying up to some coconut trees … and the fun begins. As the sun sets, the mosquitos (and multitude of other insects large and small) rise. Soon our boat’s “front deck” is covered with a crawling sea of hell for April. She uses her sari like a burka to cover every part of her body from the bugs — in the 100% humidity and heat. She spritzes herself full of bug spray like the perfume salesgirls at Nordstrom. She cringes, swats, swings, and is generally miserable. We finally create a toxic “dead zone” long enough to watch part of a Tamil film which has been subtitled in English. It’s crazy … some plot about a man cutting off a girl’s hair so that he can arrange his sister to marry out of the village but really cutting off the mom’s hair by accident … all the while bursting out into singing and 80’s dance moves every other scene. It also highlights what radically different cultures we’re in.

Thankfully, mid-movie the crew suggests that we dine in our small and enclosed cabin. It’s hot, stuffy, and smells like mold — which means that comparatively it’s pretty much heaven. At least there aren’t many bugs in there … or so it seems. 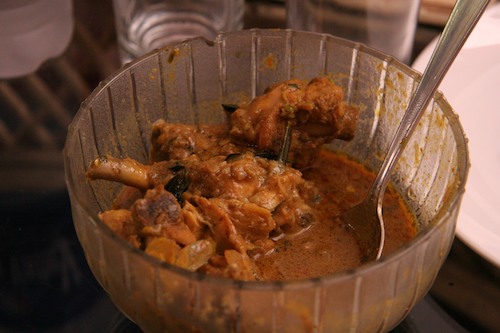 (The thought of this makes my mouth water, it was amazing)

Dinner is smaller, with a very tasty bird dish (I think?) of some sort, in a brown, spicy gravy with strong hints of cinnamon and perfectly melded flavors. It’s again served with an Indian bread that’s pretty much exactly a tortilla. (I’m not sure who made them first, probably the Indians, but I really had no idea that there were tortillas in other parts of the world.) 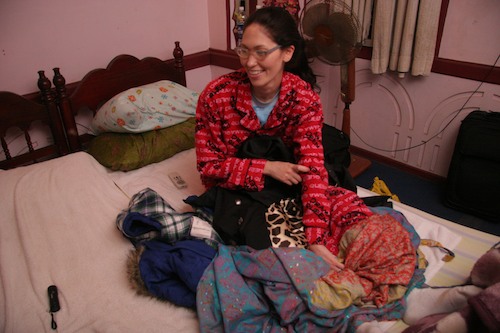 We manage to get the crew to start the generator for a bit to run the A/C, which takes some edge off the heat. And at last, it’s time for bed … safe, clean, cool, wonderful bed. (Yeah, right.) As we lay down on the damp mattresses we realize that bed, it turns out, is a bit less sanitized than we Americans prefer. In fact, there are small, dark bugs crawling on it, which April is sure are bedbugs … or mites? Scabies? Maybe only fleas?! All of the above?!?!? (But since April lived on a cruise ship where they once had a bedbug outbreak, she knows all about how the bugs burrow under people’s skin and are very, very difficult to get rid of.) Add to that the bar that goes across April’s back through the middle of the bed, and the fact that the boat is heeling towards my side of the bed, and you can tell that we’re in for a romantic, well-slept night. With nowhere to go but outside — the haven of millions of mosquitos covering the ceiling — we stay in and scrounge up 2 towels to lay on and kick off the blanket, hoping for the best. We wrap our pillows in whatever clean laundry we can find, and cover ourselves in jackets and other items from our suitcases. Shortly, the A/C kicks off, the temperature soars, and we realize that we can’t even open the window (no screens, more bugs) for fresh air. (The beauty of camping is that you have somewhere to GO, or at least a bug-free tent to sleep in.) April stays up most of the night, aching from the lumpy, bug-ridden, sloping bed, enjoying the hot, grimy, sticky night air in the backwaters of Kerala. 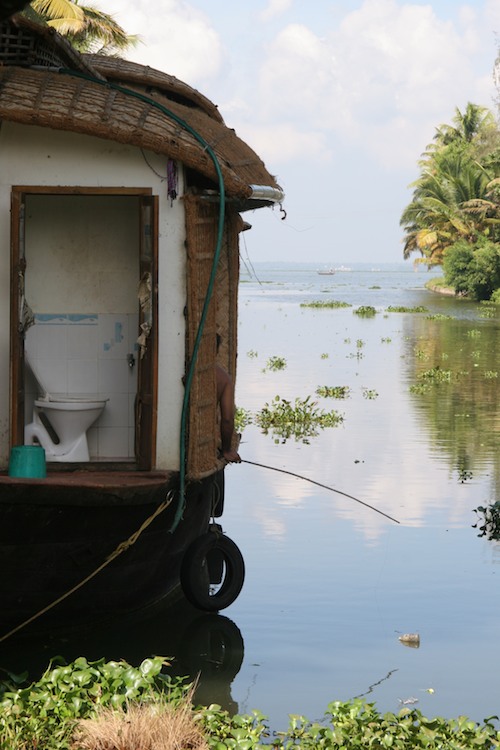 Weeks and years will pass, and I’m sure we’ll look at the photographs and see a beautiful, romantic journey in the backwaters. Please, please remind us of the reality should we ever start to forget.

(Note: There are many more beautiful photos of the houseboats and the backwaters of Kerala. TheÂ full photo gallery from India is here, with the post above covered in photos 0762 – 1468. TheÂ other posts on India are here … and the reason why we’re on this trip is the non-profit website we’re creating,Â Creative Offering.)