While I’m waiting in the hospital lobby, I wanted to see if anyone out there had seen any good techniques for recreating the effects in the movie “300.”

The directors talked about the post-processing of the film as “The Crush,” where they crushed the blacks down to increase contrast, then enhanced the saturation. But it’s clearly more than that … they’ve also color-graded the film, lit it specially, etc. Here’s a good sample:

I was inspired to create something similar. So I played around in photoshop … combined an image I took (Madrid, the girl) with about 4 or 5 other stock elements. I spent a little time balancing the brightness of the images (darken background, lighten model) to come up with my final “base” composite image: 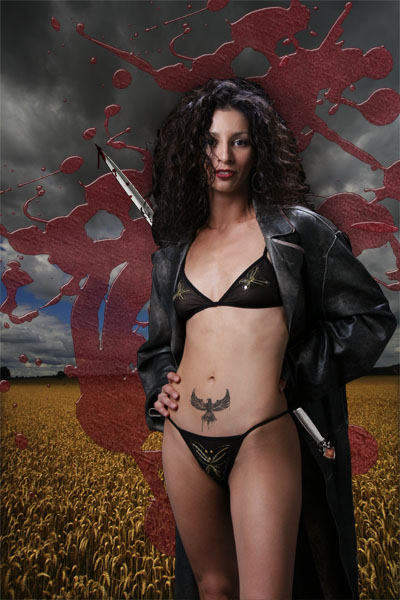 To that I applied the filter by Nik called Monday Morning (Sepia) … this was a big help: 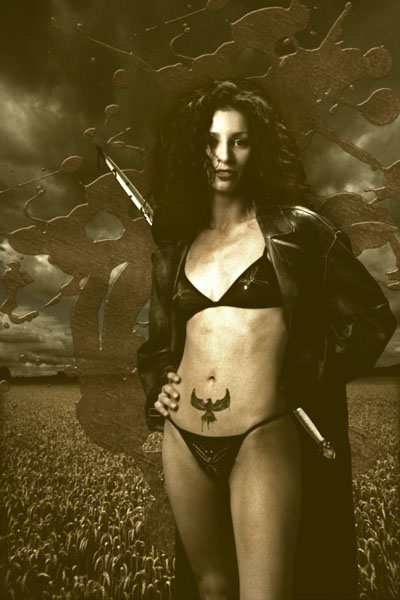 Of course, that’s not the “300 effect” quite yet … so I took the base image, made a copy of the layer and put it right back on top, turned the mode to “multiply” and turned opacity back to 50%. This gets us to that black “crush” mode that the director talked about, and puts some of the color back: 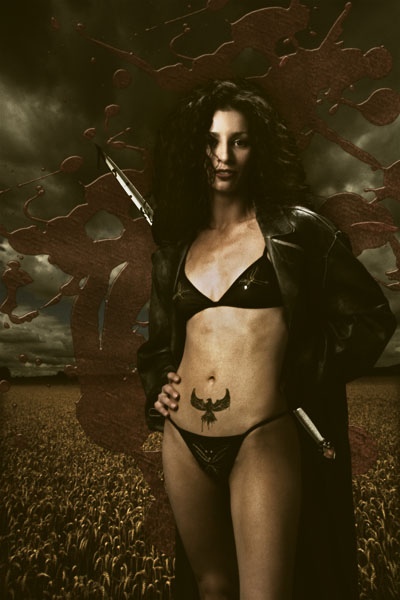 Now it’s relatively close. My lighting wasn’t like theirs, and (since I was pulling an old shot), I didn’t shoot her all oiled up like in the orig. So the last part was to add a lighting effect. This is a lesson for another day, but I basically motion-blurred the background layer like 60 pixels down-right, then threw it back on top in “lighten” mode and made a layer mask to reveal where the light would be. Yes, that sounds like gibberish if you’re not a photoshop person, but it was actually pretty simple. So this is the final image: 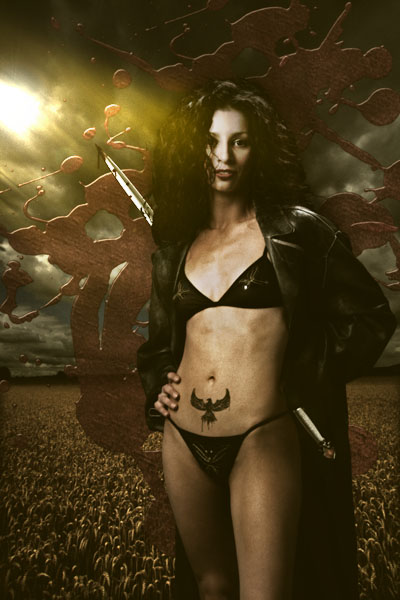 It could use some cool movie poster style type, and her body should’ve been lit less evenly, but this was mostly exploratory. So now I have two requests:
1) I would love to hear/see how YOU created the color effects from the movie 300, and
2) I’d like to know if you’re interested in seeing more posts like this one, and if so what experience level you want (easy? advanced?)

[Edit 1: The Monday Morning filter comes from Nik Efex Pro. It seems to do several things, including a “crush-like” color effect, and blurring the background … but I haven’t researched it.]

[Edit 2: This wasn’t the best photoshop writeup, and I haven’t made time to go and clarify the process … but I HAVE started to write other photoshop How To’s … and they are now listed under a new category. If you click the category at right, you’ll see all the articles (all 2 as of now).]