Surreal. It’s the word that comes to mind over and over again as we circle the globe on our Wedding World Tour — four weddings in four vastly different cultures.

At the moment I’m sitting outside an old colonial style mansion in Kenya. It’s Monday, presumably February 21, 2011. April is napping after our overnight journey from Bangkok, I’m drinking an ice-cold Tusker beer, there’s a slight breeze, the temperature is ideal, the dog is chasing the warthogs, and several giraffes are eating from the trees a few feet away. We’re at Giraffe Manor — former home of “Out of Africa” author Karen Blixen — and life is heavenly. (Cell phone picture of the closest living being to me is below.)

Neither of us can believe that we’ve only been gone 1 week, and the experiences have been so unreal that, sitting here with the giraffes, we look back on activities only a day old and wonder “Did that really happen? Is THIS really happening?” As unreal as it feels, though, we are enjoying every moment like a wonderful dream you don’t want to awaken from.

After about 30 hours of traveling, we arrived in Bangkok on Tuesday last, and immediately flew to Chiang Mai in the north. With our amazing Emirates flight, we were actually pretty well rested and feeling healthy, so we hired our airport taxi driver, Josh, for the rest of the day (800 baht, about $24). We first took a “nap” (finally!!), and then took the tourist’s tour of Chiang Mai: the umbrella-making shop (colorful and interesting, but not so culturally authentic), then a jewelry store (turns out the taxi drivers get free gas if they bring you there, we later discovered), and a silk store. The silk shop tripped is out: inside were covered baskets with, we figured, product in them. But lo and behold, when we opened one up it was a writhing mass of worms and their silk cocoons … they were actually making silk. The scarves were of the most beautiful fabric and colors I have ever seen, but were quite expensive (around $40/each) by Thai standards.

(At this point on my writing, Lynn came over. Lynn is a 15-year old female Rothschild giraffe, about 16 feet tall. She first ate from my hand. Then, her 16-inch long tongue reached out and took from my mouth —

(and at this point, we had even more activities, all good … to be continued…)) 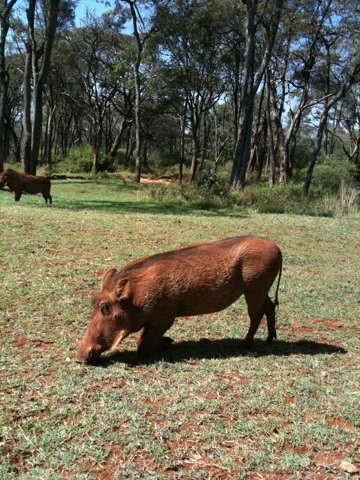