Charlize Theron, Senzy, Portia, and the magic of Twitter 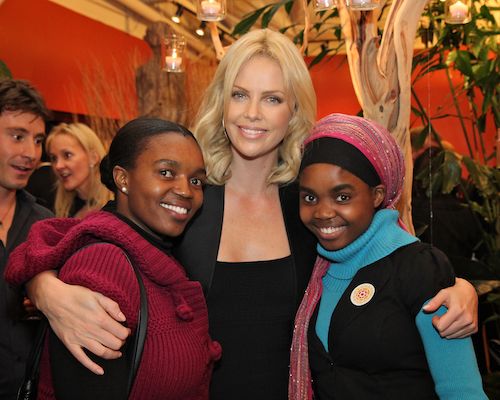 I was fortunate enough to receive an invite from my great friend Michael to an event hosted by theÂ Center for Living Peace on 4 December 2010. There, aÂ charming, relaxed, beautiful and deeply caring Charlize Theron spent the entire day promoting her Africa Outreach Program. She spoke of her internal fears about not being able to really make a difference, on how overwhelming and emotionally devastating the problems on her home-continent can be, and of the joys of improving someone else’s live, whether it’s one person or many. She inspired me to push my charity, creativeoffering.org, even harder, and one of her partners there, Dr. Michael Bennish, helped me realize how much one can really give if we just chose to do it.

But what struck me was a strange coincidence of the Twitterverse, and my highlight of the evening began with this cryptic message from my host Michael:Â “I’m picking up 2 more people,” he text messaged me, “I’ll meet you there.”

Michael had been asked by The Center to pick up two girls — Portia and Senzy (at left and right above) — after quite an amazing story arose suddenly from amongst the 1.5 million Tweets about this event today. To excerpt from the CEO of the organization that funded their scholarship:

I am still amazed at the synchronicity of everything: I was having dinner in a restaurant in South Africa tonight (since we’re in a timezone about 9 hours ahead of you), when I suddenly felt the urge to try to contact Charlize Theron. I really like Charlize as an actress and as a philanthropist, but have never before thought of getting in touch with her, so it was quite strange that I felt such a sudden sense of urgency. Anyway,Â I asked myÂ husband if I could use his laptop right there in the restaurantÂ and found the Twitter message about the event in Irvine. “This can’t be a coincidence!” I thought, since our former Themba students are based in Irvine. And now – through your incredible generosity – Portia and Senzy will be seeing Charlize in person, on the very day I hoped I could contact her somehow!

A prior email had told a little of their story, and requested (at the very last minute) that they could attend this event.

thanks again so much for being so helpful in trying to get the two young South African girls … to attend today’s event. The two girls are Senzy from SwazilandÂ and Portia from South Africa. Both have lost their mothers and are like millions of children and youth in Africa that are struggling to cope with life in a poverty-stricken environment.
Senzy and Portia each won a full scholarship in 2007Â to study [in the USA] after participating in a girls choir project to raise funds for kids from poor, deep rural homes. There is a website describing that project atÂ www.thembagirls.org. The voice you hear when you open the website is Senzy’s voice. Both girls are gifted singers and would have loved to support Charlize’s efforts tonight by singing an ‘impromptu’ Zulu song. But I do understand that it’s simply too late to arrange that!

With the event planners beyond-busy, the event nearly full, and the girls with no way to get to the event, this seemed like a near impossibility, though. Yet by hands of fate (again), the event coordinator answered her phone (one of the only calls she grabbed all day — a blocked number no less — she said, one that she somehow felt compelled to answer), made the arrangements, and got Michael to help with the transportation. 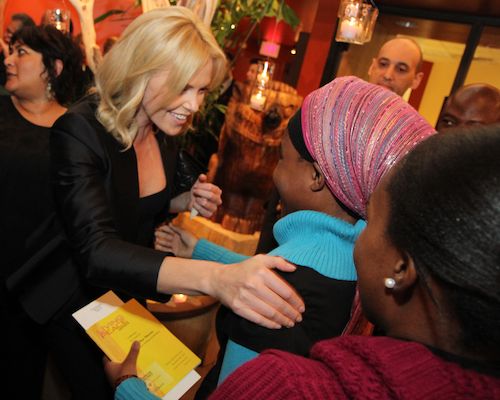 We got to spend quite a bit of time with Senzy and Portia, who were vibrant and happy … even with the “culture shock” of the move from remote Africa to Southern California, to now ending up halfway around the world in the room with a famous actor, an ambassador from the Dalai Lama, Olympic Gold Medalists, and many of Orange County’s top personalities. (At one point, the girls told me that there were more people at the reception we were at than in their home village!) 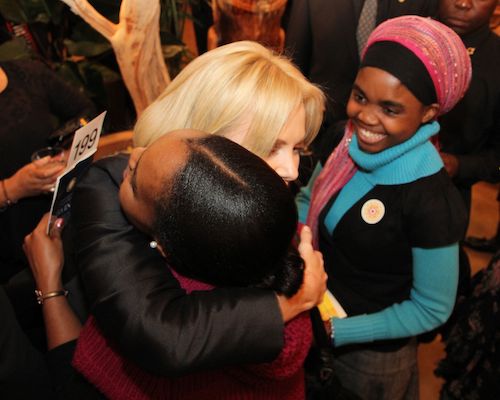 I learned that as high school friends, they had come here four years ago on scholarships and are studying accounting and art. And while they love it here, they are really looking forward to returning home to their families later this year. Although hot dogs are okay, Mexican food isn’t a favorite … and they really miss a homecooked rice, gravy and meat meal. But most importantly, they showed me again that happiness comes from the inside, not from the money in our bank nor the things we own. It sounds cliche, I know … but to see two S. African “village girls” transformed into Southern Californians and thrown into the world of celebrity fundraisers … and to hear their excitement to return home to their friends and families and to make a difference back there … it was one of those nights that helps put it all in perspective. (And yes, I do appreciate the great irony that this revelation was had at, of all places, a luxurious fundraiser. But I’ll take the learning where I can get it!) 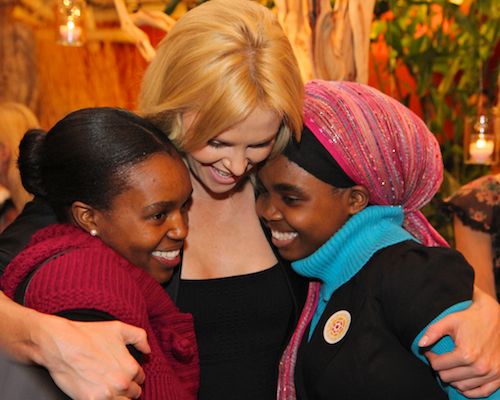 So back to the story. In the end, the girls DID get to sing a Zulu song. The room was loud and they weren’t amplified … but they sounded great nevertheless:

I got a kick out of Senzy telling me right after that she was worried about remembering some of the words. It was in ZULU, I said, as we both laughed, realizing that likely no one there knew a word of what they were saying.

The evening ended well, with Charlize raising a decent amount (tough crowd though, even asking her to do a “header” with a soccer ball for cash at one point!), and everyone seeming to have a great time.

Congratulations, Portia and Senzy! I look forward to following your progress… And many, many thanks to The Center for Living Peace for what you are doing. They have some amazing events on schedule, so check out their site (www.goodhappens.org, brilliant name, right?) and also The African Outreach Project for more info.