The Kids of Palakkad

India, 20 Nov 2009 (Friday) – Once again we are under-slept and travel weary as we get up at 6am to be out of our 2-bedroom apartment in Bangalore by 7am. We head the harrowing roads back to the airport, through security lines segregated by sex, and onto a Kingfisher Airlines turboprop to Coimbatore airport. Kingfisher – owned by man who owns the large Indian beer company – is actually a very nice airline, with recorded announcements in this alluring, sexy voice, and a pretty good vegetarian meal served on such a very short trip. (You hardly get peanuts on most of the US airlines, even on 4 hour flights.) The inflight magazine is a trip … I’ll have to take some pix later an upload them. 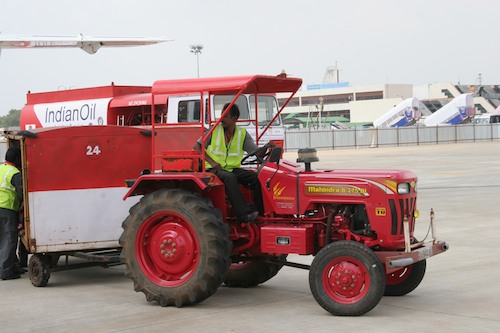 After landing, a big red tractor pulls in our luggage, and our new driver gets us to Palakkad, south India. (It’s pronounced Palghad, which I later learns how it is pronounced in the language of this region.)

A quick aside on the languages: each state in India has it’s own language (that’s how they divided the states), plus Hindi, plus English. But most of the people we’ve met talk natively to each other in English. I had always assumed that the Indian accent I hear was because they didn’t learn English correctly. The more accurate answer, it seems, is that it’s just like Australian versus American versus The Queen’s English: it’s just Indian English, and that’s just the way they speak it. So Bangalore had one language, the aiport area at Coimbatore (in the state of Tamil Nadu) had another, and finally Palakkad (in the state of Kerala, India) has Malayalam – more on that later. 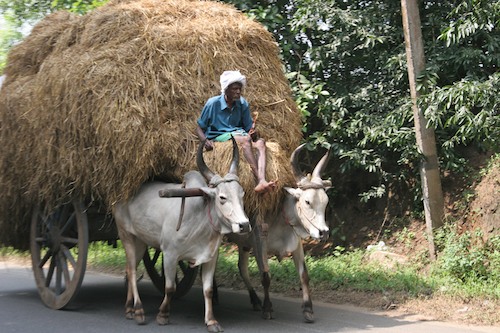 We take a turn down a small back road and end up at Enventure (our new friend Anil’s technology company and Creative Offering‘s web developer) . There’s a great reception, with flowers, tea, banana chips, sweet coconut (fresh coconut that you drink out from a straw), and we shake hands with lots of people and see the great operation. We spend some more time getting to know each other and talk for a long time about the website. I have a realization that what we’re trying to do is essentially create a clearinghouse for all non-cash donations to charity, using people greed to actually encourage them to give more. As we leave, we’re presented with a beautiful piece of local art featuring an elephant. 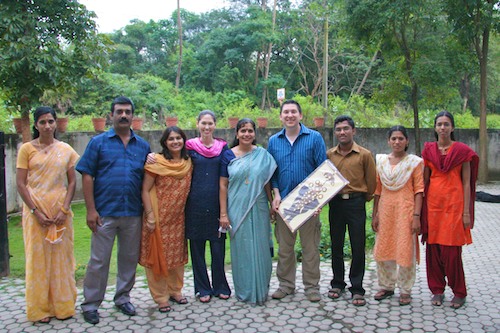 Speaking of elephant, we were going to go ride an elephant at about this time, but apparently we couldn’t get ahold of the friend who happened to own an elephant, so it was off.

We arrive quite late at the village where we are touring some of the works done by Enventure’s VP, Nirmala, as a part of a large Swami’s organization. A large group of girls are standing outside a very small, humble village in their most beautiful orange fancy dresses, shy, waiting to greet us. They instantly take us to their temple. (The larger temple is under construction – so they inform us that god has moved temporarily to a smaller temple next door while his larger one is out of commission.) We walk a bit in the village, seeing roosters, people hand washing their clothing on the concrete and dirt areas, and as we pass one house we are invited in. 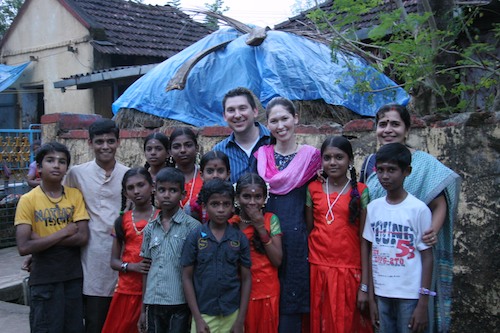 We take off our shoes (a bit of a problem for me since I wore tied tennis shoes), duck our heads, and go into a mud, clay and/or concrete house with thatched roof, about the size of an American bathroom, with a small shrine on the wall, and two plastic chairs. We are the honored guests, and we are motioned to sit in the chairs. They offered April a red paste stick her ring finger in, then to dot her forehead with … a blessing of sorts. We stay for a couple of minutes, hearing rolling claps of thunder and seeing the lightening, hoping that another massive downpour doesn’t come. (April saw it on her first day, and says that it wasn’t raining cats & dogs, it was raining elephants.) 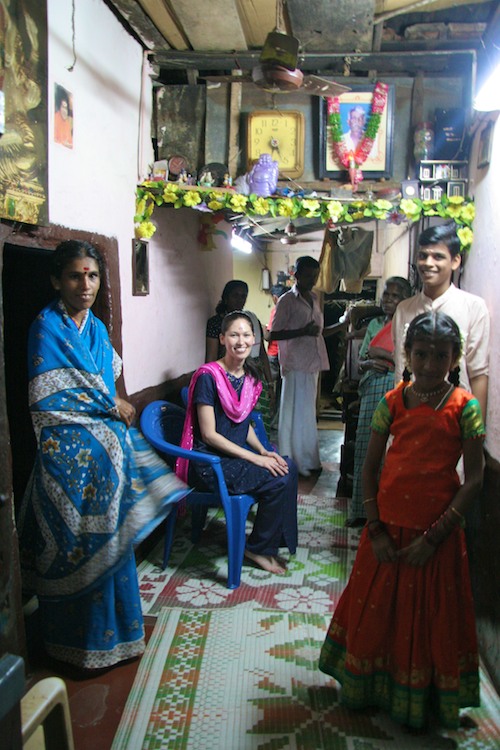 I get my shoes back on, we walk out of the house, and 10 feet later we’re asked into the next house. Cool. I struggle to take my shoes off, go in, and see another house, with grandma and grandpa and some very proud children showing us their neighborhood. We are asked to sit, which we do for a moment, express our appreciation, then leave.

Shoes back on. 10 feet. Another invitation. Little did we know that this would be repeated in 15 or so houses in the village, including one with a fish tank they were very proud of, various goats standing around, all set in a surreal, warm, dark night in India. 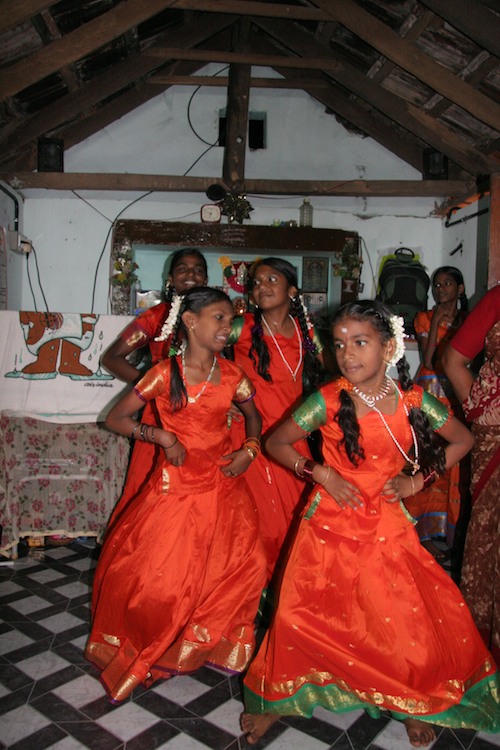 We arrive at one final house, where the kids do these amazing local dances for us, which we love. They sing a Christmas tune (which we’ve never heard), there are solo songs, Vedas sung, one boy who even shows us all of his drawings, and this ultra-cute boy in a white cloth garment (likes shorts … only different) who shoves aside a girl who gets in front of him as he dances. I take lots of pictures, of course. Then we hand out a bunch of gifts from the Dollar Store like Santa at an Indian Christmas, and have a hard time saying goodbye to all the kids. 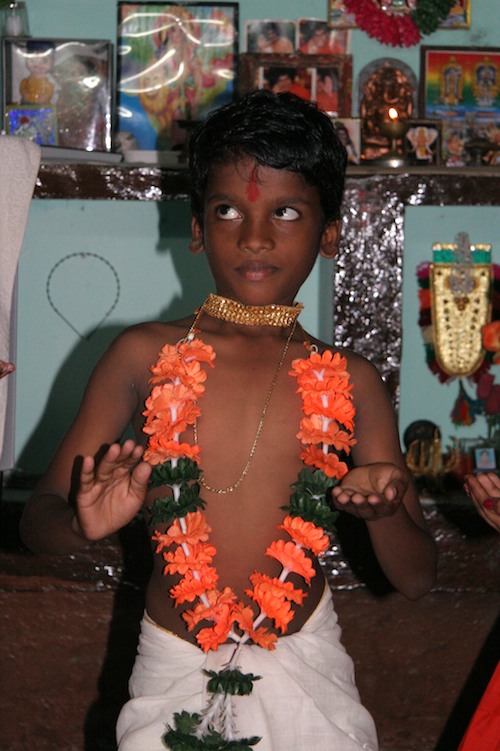 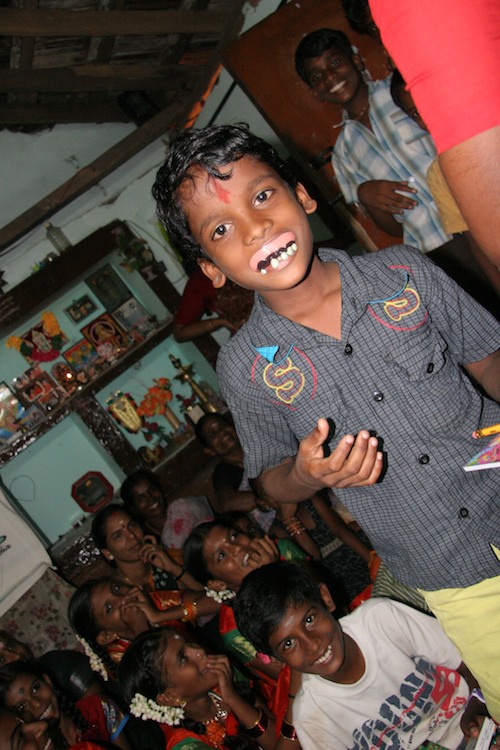 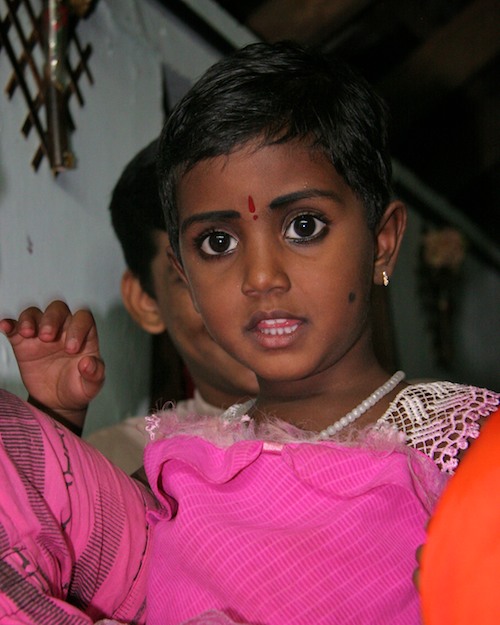 We then head to an orphanage, where 8 boys have been rescued from terrible lifestyles like begging at the train station at 8 years old. They are in a prayer room when we arrive, singing and chanting with fire and incense and elephant gods on the wall, honoring the same Swami whose service organization helps them and the kids we saw earlier. We tour their doctor’s room (with a dentist chair and several old sewing machines), their computer learning room (with an old 386-looking computer to train on), and ultimately end up as guests of honor in a front hall. There’s this 80-year old lady who they found in a ditch. She’s wizened, looking almost exactly like one of those old apple ladies you’d buy at the county fair. She shouts something to April in Mayalam, and everyone starts lauging. Apparently she likes April, as she’s asking April where her earring are; everyone knows that any good Indian girl would be wearing her earrings and bangles and an endearing grandmother would ask if she weren’t. 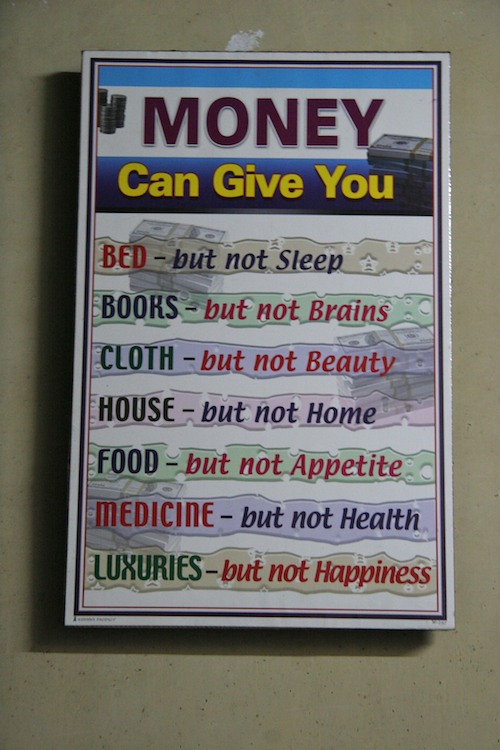 (a sign we saw in the orphanage ... never so clearly true to us) 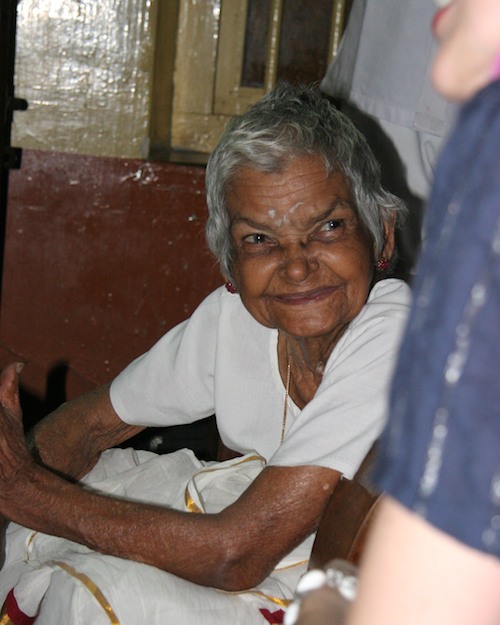 They kindly offer us water – which to be honest scares me after all the stomach horror stories we’ve heard. I take a sip to be polite, but then the real challenge comes: a pot full of sugar-flavored rice, a special treat apparently just for us. We are asked to sit as their guests of honor, and metal plates are put down in front of us. Several large scoops are slopped onto the plates, which we can’t possibly not eat. It was like that scene in the Indiana Jones movie where no matter what it was, Indiana told Kate Capshaw “eat it!” because it was more food than they had in a month. So, we ate it, making our own prayers to Swami now that we would be okay afterwards. 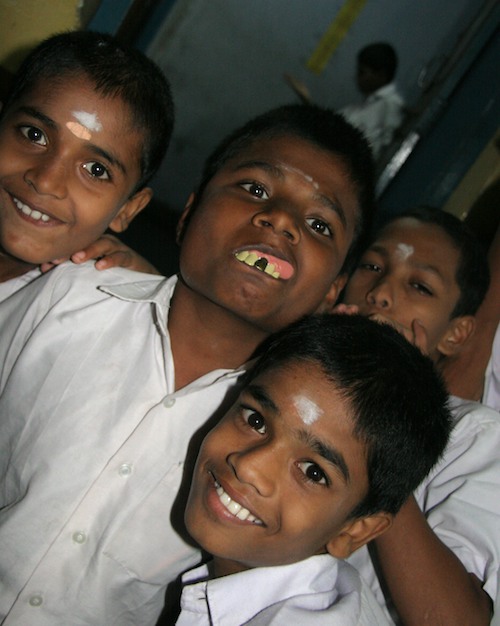 We give more gifts to the orphan boys … they are at first very shy, but eventually open up a bit and really enjoy the balls, pencils, pens, Frisbees, and of course the crazy looking fake teeth. Finally we head out, feeling more lucky than ever, feeling like we’ve received far more than we have given from the kids in the villages near Palakkad.

(Note: theÂ full photo gallery from India is here, with the post above covered in photos 0047 – 0270. TheÂ other posts on India are here … and the reason why we’re on this trip is the non-profit website we’re creating, Creative Offering.)