So what’s the best thing to do on your second SCUBA dive? Of course, it’s to find a 6 foot shark, and pet him.

On our first full day in Honduras the non-certified divers (me, Stacie and Ed) awoke early for our “pool” course. Of course, our pool was the 80 degree plus Caribbean waters of a private island, complete with a pirate fort with gun housings still intact. So we got trained a bit on breathing underwater, and got down around 15 feet under. The water was murky, but it’s still cool to be weightless. 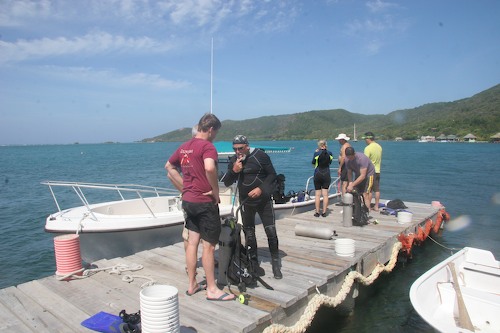 We returned to the resort (only a few minutes boat ride in little passageways between the dangerous coral reefs) and had french toast breakfast, the jumped back in the boat for our first official dive. Everyone was in the boat this time, and we moored to a little bouy at one of our divemaster’s favorite spots. For the first time, I rolled backwards off the edge of the boat (a bit unsettling, I have to admit), slowly sank down to 15 feet, and waited for everyone to gather. Then we just cruised around for the next 47 minutes, seeing a never ending coral reef filled with life. There’s no way to describe it if you haven’t done it … it’s an alien world, and you get to fly over it weightless… like some odd science-fiction movie, but real. My ears were somewhat problematic (in that I had to go up & down -very- slowly), but worked okay down to 50 feet. The best part was approaching “the wall” … a sheer 900 foot drop off. It almost feels like the world drops out from under you, and it’s eerie and disconcerting to just see nothing but water under you forever. But the life grows down the wall, and it’s incredible to see it there as well.

We returned again, had a very nice lunch of tostadas, and went out for the 2nd open water dive. This one really topped it all. We chased a squid squirting around … had a very long green moray eel agressively pursue our divemaster … and at one point, saw a 6 foot shark curved into a little indentation in the reef. Krazy Tom (or just plain “Krazy”) cautiously approached, and touched it. Nothing. So then Krazy signaled to me, and brought me in. He set himself in front of the shark (maybe that’s why they call him Krazy?!?) so the guy wouldn’t come out of the indentation, then I came from above until I could touch his sandpaper-like skin. Pretty cool, I have to admit.

Our third dive was down to 3 people, and we headed out to a further destination. Again, I hit around 50 feet, saw some great walls, had our photo taken in front of this underwater “canyon,” and generally worried about getting back into a boat that was bucking and heaving in 4-6 foot swells.

I was beat by that time, and glad to head back to shore. We had a shrimp dinner, and sat around the palapa having drinks and telling stories for the rest of the night. Amazing that all that fit into one day … 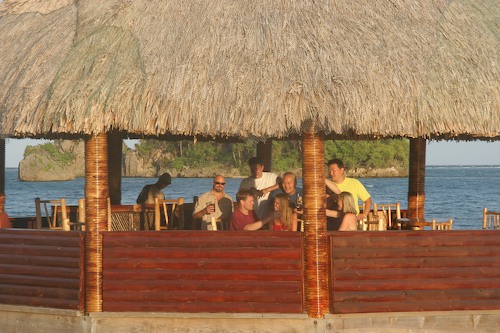 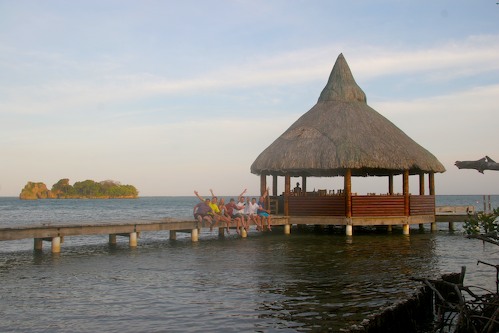 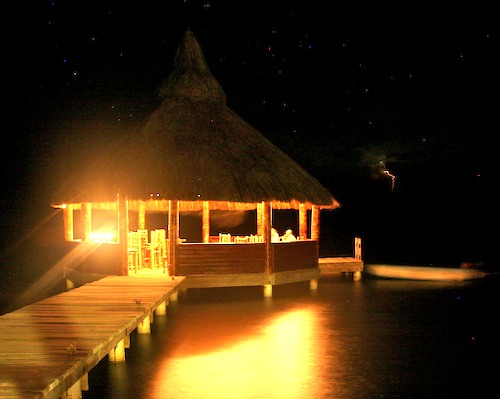