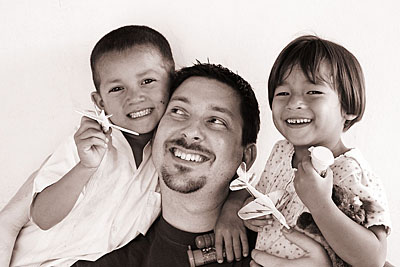 (Me at the orphanage in Tegucigalpa)

I’m back home safe. I was only gone for 3-1/2 days, but it somehow seems like this crazy time-warp where nothing changed here, and I was gone for but a moment, but somehow I was in Central America for at least 2 weeks, with all the things we experienced in such an intense timeframe. Probably the most impactful, most amazing part of the trip took place right after my last brief update.

Let me first back up a bit. We met over at the Vice Presidential house at 9:30 am, waited in the waiting room of the house until she ushered us into the conference room, and had a power point presentation about her Foundation that she’s setting up. DoÃ±a Becky (I’m not really sure what to call her … but first name only doesn’t seem appropriate.) … anyway, DoÃ±a Becky was kind, gracious, and in a cute way a little embarrassed about her English — which happened to be quite good, actually. At one point Rob had to help her with the laptop, and he had to turn it on. The login page had 2 login names, one for Elvin Santos (the Vice President) and one for his wife. It was weird to realize that Rob was messing around on the Vice President’s laptop … really weird.

After that we followed her to the hospital. (She drove her Mercedes SUV, followed by a Toyota pickup loaded with guys toting M-16s that were -very- serious about their job.) Have you ever seen on TV when a first-lady shows up at a hospital, and the Director of the Hospital is waiting outside … there are cameras everywhere, and a huge contingent of people surrounds her, like a human blob moving through the hospital? Well … that was exactly the situation. It’s easy to sit in a room and feel like their situation isn’t really all that different than the VP of a huge corporation. But then, in a situation like that, I really got to realize just a tiny bit of where these people are in a culture of 7,000,000 … at the very very top.

The nutrition wing of the hospital was heartbreaking. There weren’t too many kids there for some reason, but they were miserable, they were sick, they were terrified. This was the “before” … this was what we were there to cure (for a few kids, at least) by setting up the feeding programs. This was the “why.” It was important to see, but not fun to see. From there, we headed over the house that DoÃ±a Becky had setup for her Foundation, where she will get 25 kids from the nourishment wing of hospital back to health, over 3 months. We were late, so at that point we jetted over to the hotel to pack our bags and check out … and that’s where the previous update was made.

We went from the hotel to a gas station, of all places, for lunch. (We were in a hurry, and at that point food was just “fuel” … so the gas station worked out okay.) Then we headed over to the orphanage. The one hour there might have been the most impactful to me … or at least, it probably felt the best. Wendy — our representative from WER, the non-profit that funds and oversees the programs down there — Wendy knows these kids, and had visited them many times. As she walked up to the door of the orphanage, it was silent. No sign of kids whatsoever. But then, dozens of “Wendita, Wendita, Wendita!!”s all erupted, and kids came streaming out the door, jumping up on her, hugging her, kissing her. And when no more kids could fit — because you can only hug about 10 kids at once — they noticed us. Adorable orphan after adorable orphan ran up, hugging and kissing me, big smiles on their faces. It was incredible. I took pictures for a few seconds, but then it was all about meeting these 22 kids. Chris’ mom Patty handed out toy airplanes, teddy bears, and M&Ms, and I watched and video’d. At one point, the 2 kids above were cuddling me, and I handed the camera to Chris and said “you gotta shoot this.” It’s probably my favorite picture of me ever. Anyway, our time there was too short, but I loved these kids, they were fantastic.

We had to leave, and one of the girls who had been hugging me and so friendly wouldn’t hug me good-bye. I talked her into a “beso” (kiss), but she was distant all of a sudden. I asked why, and Wendy told me that the kids sometimes have trouble saying goodbye. Of course they do … I was sad when I thought about it, and I was sad to leave them.

We headed to the airport and soon we were gone, leaving Tegucigalpa to San Salvador then Los Angeles.