The Bustle of Bangalore 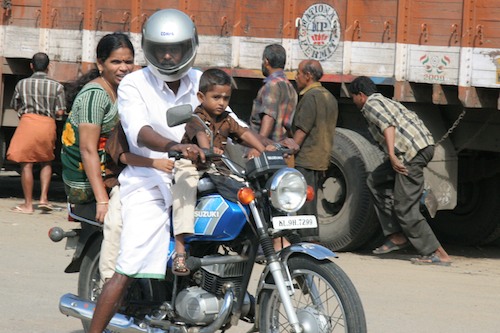 (Good thing DAD has his helmet on! Note the family of 4 on the motorcycle.)

After a great flight on British Airways down to Bangalore (or Bengaluru, as it’s officially named now), I finally arrive in India. I have to admit, standing in the airport I could’ve been in Mexico or any other tropical airport. The people and outfits look as normal as an afternoon at LAX back home in California.

The body scanner – a big TV hooked up to a video camera, showing everyone as a heat signature like in some crazy video game – was India’s way to catch people with a fever and stop the spread of swine flu. And as a member of one of 3 countries considered infected, we had to be reviewed by medical personnel before being let in.

I zoom through customs (worrying for 20 minutes that one bag was lost) and the driver sent by our web developer whisks me into a world where the red road sign with 6 sides means “honk your horn multiple times before accelerating through intersection” and those little white stripes in the middle of the road mean … well, mean pretty much nothing. Traffic is a jumble of ignored lanes, disregarded traffic signals, constant beep-beeping, passing on the wrong side of the road, and yet it somehow works. (And somehow seems safer than most other places I’ve traveled.) 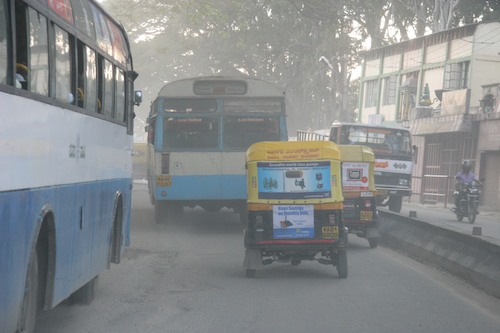 The day goes quickly: a long meeting getting to know my new friends in India who are developing Creative Offering, an amazingly fragrant, spicy lunch of perfect northern Indian food, more detail planning for the rest of our trip, and three hours of shopping at what is basically a fabric store. I buy silk beddings as gifts. April nearly buys an Indian wedding dress for our wedding, but instead settles on a stunning blue, super-sparkly custom-fitted Sari. (Actually, it’s not really a Sari, but close. I have no idea what the real name of it is.) The Sair would’ve been $400 or $500 in the States. It was about $100 in Bangalore, with lots of custom tailoring, making sleeves, repositioning decorations, etc included. The wedding dress was 50,000 rupees – about $1,000. It took one person 3 months to make, a unique one-off “haute couture” piece of art … incredible.

I find some traditional men’s clothing – 2 pieces in particular that I loved – but don’t buy anything as we’re short on time. We head out and go to dinner with Anil and his wife and two fellow friends (also members of Entrepreneurs’ Organization, the group I’m in that led me to Anil). The Persian food is good, but having a “normal” dinner with new friends from a radically different culture halfway around the world is the best. We discuss normal things, like arranged marriages, the chicken-raising business, etc. April and I are constantly distracted (and fascinated by) the huge group of bats flitting around just off the balcony we sit on. There are large trees with a hanging white fruit which looks completely fake – like Styrofoam balls. The bats land upside down on the fruit and eat. One gigantic bat (we at first thought it was FOUR bats) lands; he must have been 3 to 5 pounds and about 2-hands tall.

We head back to the hotel around 11pm, and immediately, exhaustedly crash out to the sounds of Bangalore’s beeping background. I can’t believe it’s only been my first day.

(Note: Due to the spotty internet — difficulty finding places to charge computers — you’re getting multiple posts at one time and big delays. But it’s now Saturday night, and all is good.)