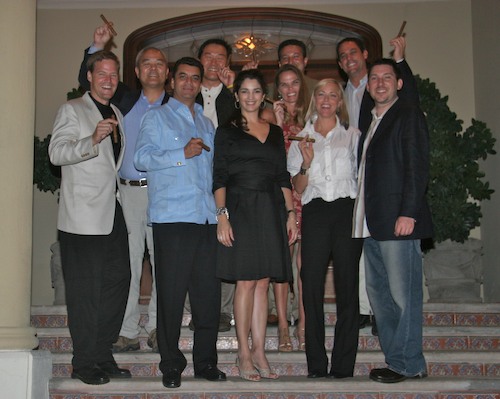 You wouldn’t think that a few candles perceptibly increase the temperature of your room, especially when the “windows” have no glass (only screens), and there is a breeze. But sure enough, I come back to my room here in Copan and itâ€™s definitely warmer.

There’s also the issue of the stray “bat” fluttering around in my room. I actually think he is an exceptionally large moth, but he’s so big that as I opened my computer a moment ago, I was worried that he would fly towards the light.

Anyway, I need to catch up. Although I have no internet, I’ll write a blog entry in Word and post it when I next have internet.

So the last I wrote covered Saturday and Roatan. On Sunday morning (May 6, 2007), as I woke up, I didn’t feel all that great. I actually woke up before the sun for bathroom purposes, and decided to stay up until sunrise for the photos. As I walked to our pier, the enormous dogs that guard the place came bounding across the lawn, mean-looking, and running full speed while barking. I thought for sure I was going to get attacked. I crouched down and talked softlyâ€¦ and thankfully, I think the biggest dog was as afraid of me as I was of him. He stopped about 30 feet away, and just barked. Finally, Corinne (resort owner) came out and dragged him away.

I went and sat out on the pier as the sun came up. Nothing spectacular, but a rare event for me, and beautiful just for what it was: a sunrise in paradise.

I went back to bed, and awoke after breakfast. I ate a little, then we jumped on the boat and headed back to civilization. We had a few drinks with our friend at the dock, and then jumped in the bus for our 45 minute ride to the very little airport.

From there the rest of the afternoon was a hell of flights. We flew first to La Ceiba â€“ which was NOT on our itinerary, then over to San Pedro Sula. At each stop the air-conditioning on the plane did not work. It was hot as hell, only mitigated by the oversize tube they would stick in the door that blew cool air into the 2-propeller plane. Weird.

So from San Pedro Sula we finally flew to Tegucigalpa (or Tegus as itâ€™s called.) Tegus is a big, dirty, bustling, gang-filled city. Not somewhere with a lot of redeeming qualities, to be honest. After landing (in the middle of an air show, oddly), we shot off to the Intercontinental, which is a very nice hotel. (Itâ€™s still Honduras, though, and check-in on the â€œspecialâ€ floor of the best-of-the-best hotel still took an hour.)

Once checked in we zoomed off to our dinner with the Vice President, Mr Elvin Santos, and his wonderful wife Becky. The dinner was everything I could have asked for: very candid discussions of politics; historical discussions of the problems of Central America and how they are being addressed; discussions about Beckyâ€™s malnutrition recover center; and generally the most interesting political discussions I can remember â€¦ talking with someone who is in the position to know, to make a difference, to understand.

A few of the most disturbing points were hearing how much jeopardy his life would be if he chose to pursue the presidency, and also how the average Honduran mother begins motherhood at age 14. Wowâ€¦ the -average- girl is pregnant at 14 years- of age. Astounding.

From there we headed back to the hotel, to drink the bar to the closing while a few guys smoked cigars indoors. Again, strange, but no big deal here. Outside the hotel, a downpour brought thunder and lightning to the city, while we comfortably chatted about everything.